On 23 October, 2017, the following two students, chosen at random from many winners of Rowe scientific prizes, received their awards by the STAV’s Science Talent Search.

Dylan won his award in the Junior (Yr 7-8) Inventions section, by inventing a Smart Lock: The “ZipVault” was constructed using complex wood working knowledge as well as the advanced use of electronic components and wiring and the development of code using high levels of logical and mathematical thinking.

It was designed to give people peace of mind, knowing that their belongings were safe and out of anyone elses reach.

The box features two extra layers of security on top of the expected 6-digit pin, with already over ten million different possible combinations, requiring a magnet to turn it on, as well as for the owner to tilt the box four times, before you are confronted with the 6-digit pin.

Once you are finished, the box locks and shuts down, using no power whatsoever

Eleeza won her award in the Junior (Yr 7-8) Experimental Research section, for the following project: “Does Aromatherapy essential oils vapour inhibit the growth of Escherichia Coli?”

The results showed that the most effective oils in descending order were tea tree, eucalyptus, grapefruit, peppermint, and lavender. Only tea tree oil and grapefruit oil were significantly effective and consistent with background research claims.

Sounds like impressive work for a Junior Eleeza. Well done, from the Rowe Scientific staff. 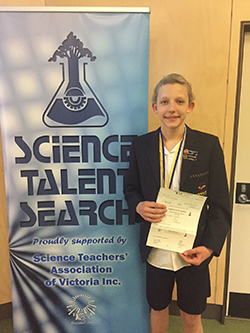